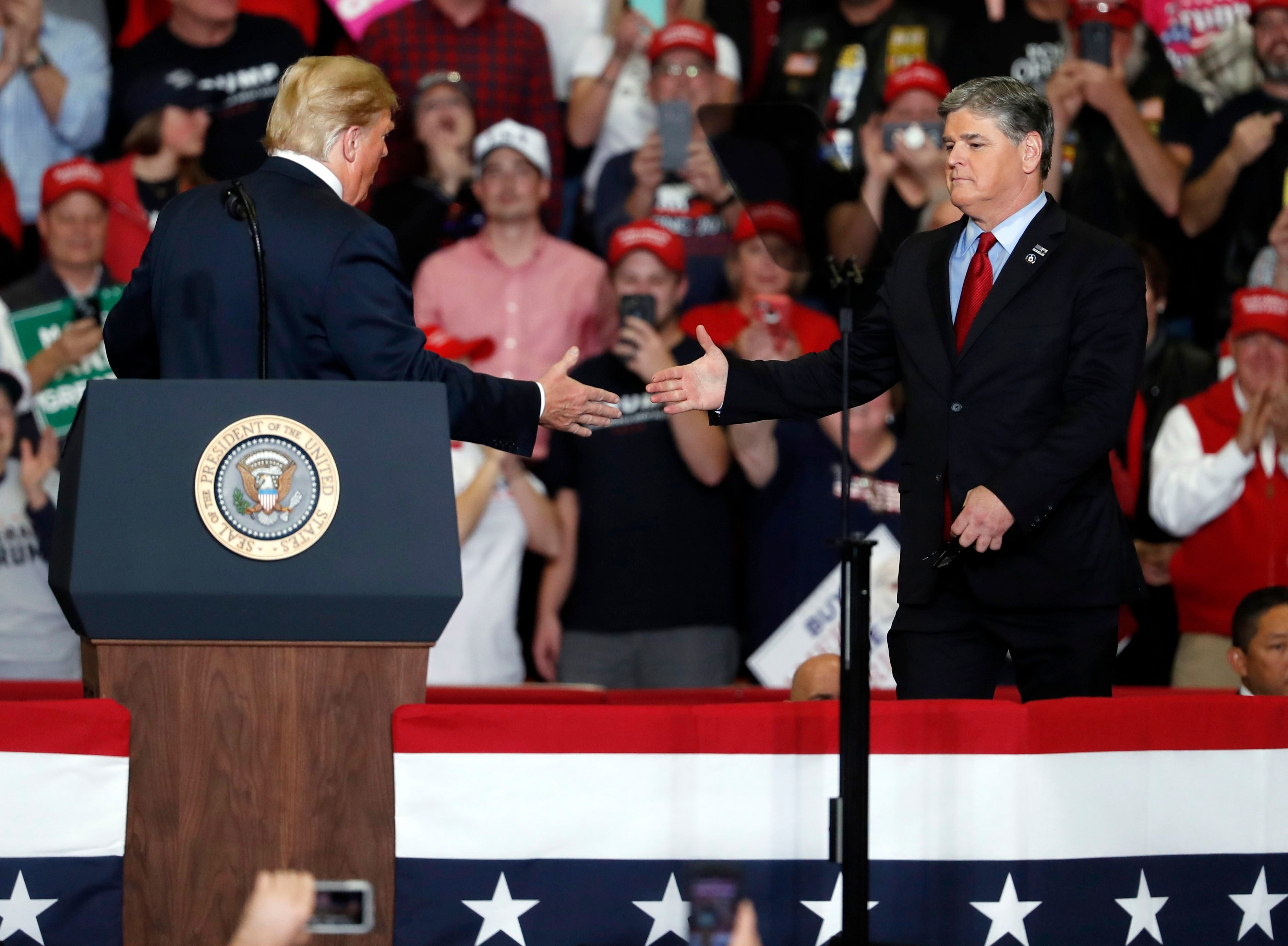 Most Americans interested in politics understand the importance of the impeachment inquiry. But for those whose media diet consists exclusively of Fox News and its downstream products, like the presidents Twitter feed, you might think that an important development in the inquiry is Republicans' failed vote Monday to censure Adam Schiff, the House Intelligence Committee chairman. For the past few weeks, the vote tied to a moment in which Schiff parodied Trumps phone call with Ukrainian President Volodymyr Zelensky on the House floor never had a chance of passing, and is based on an intentional misreading of Schiffs actions. It is, in the context of the actual stakes of the impeachment inquiry and the conduct Trump is accused of, a distraction. Anyone whos not steeped in the alternate reality of conservative media might not have known it ever happened, but the vote received extended play in the conservative media universe, where Fox News anchors like Sean Hannity aggressively lobbied Republican House representatives to support the legislation.

On Tuesday morning, a few minutes after Fox News published a graphic noting that all 185 Republicans in the House had voted to censure Schiff, Trump tweeted this:

Meanwhile, on the network itself, former Utah Rep. Jason Chaffetz applauded his fellow Republicans for finally playing offense on impeachment.

The vote, and the circus surrounding it, is just the latest example of a kind of strange political theater that often emerges from the Republican media ouroboros in the Trump era. It works like this: Attention-hungry House Republicans pull stunts designed to earn them airtime on Fox News, which is closely watched by the president, who then favors the congressmen involved and gives their careers a boost. Meanwhile, the network is consistently provided with new grist for the content mill to serve their credulous viewers, who would rather hear positive stories about fan favorites like Ohio Rep. Jim Jordan taking a stand against Schiff than real stories about the latest devastating revelations from the impeachment inquiry. After a few years, some of these congressmen, like Chaffetz and former South Carolina Rep. Trey Gowdy, have ended up with lucrative contributor gigs on Fox News.

Trumps wild popularity among the Republican base is the grease that keeps this wheel turning. It starts with the fact that President Trump is obsessed with Fox News, he watches it constantly and pays close attention to what its hosts and anchors say, reaches out to many of them for private advice, Matt Gertz, a senior fellow at Media Matters for America who studies Fox News, told Mic. Congressional Republicans, because of that, have recognized that they can use the network as rocket fuel for their careers. Audiences who consume only Fox News your grandparents, perhaps often develop wildly skewed notions of what is actually happening.

Meanwhile, when Republicans go on the network and defend the president, they are talking directly into his ear. He responds to that, says Gertz, pointing to the raised profiles that former low-profile backbenchers like Jordan and Florida Rep. Matt Gaetz have enjoyed after becoming prominent members of the Fox News presidential defense squad. Ron DeSantis, as a Florida congressman and Fox News staple, parlayed his Trump-defending ways into a move to the governor's mansion last year after the president and his Twitter feed consistently backed DeSantis in a close race against Democrat Andrew Gillum.

You can take the off-ramp and get a job at Fox and make more money for less work, says Gertz, or you can stay in government and use the attention you get from Fox News to bolster your career. Gertz also points to North Carolina Rep. Mark Meadows, the powerful head of the ultra-conservative House Freedom Caucus, as a prime beneficiary of this system. Thanks to Fox News, Meadows has become a constant presence in the White House due to his staunch defenses of the president.

Over the past few years, some Republicans have become increasingly adept at manufacturing political spectacles designed specifically to catapult them onto Trumps favorite network. They realized that they can use their public powers as hooks that then allow them to go on Fox shows and talk about how much they support the president, Gertz explains. The Schiff censure vote closely mirrors the events surrounding the 2017 #ReleaseTheMemo affair, in which California Rep. Devin Nunes, also a Fox News favorite, created an absurd spectacle designed to distract from unceasing negative press for Trump due to the then-ongoing investigation led by Robert Mueller, the former special counsel.

Nunes, at the time the chairman of the House Intelligence Committee, had written a classified memo about the Mueller investigation. Like clockwork, Republican congressmen appeared on Fox News to hype the memos importance, enabling hosts like Fox News' Hannity or Fox Business Network's Lou Dobbs to clamor for the president to declassify the memo. Trump eventually did, only for the memo to be revealed as a deeply insubstantial.

Gertz describes the entire affair as a farce which nonetheless created substantial political utility for Trump, captivated the Fox News audience, and provided a career boost for the Republican congressmen involved. The memo comes out and its a total nothingburger, but they suck up a lot of attention and oxygen, he says. Everyone involved is demonstrating that they support the president, and thus have the benefits of that.

Similar patterns repeated during Muellers testimony before the House following the release of the report containing conclusions from his nearly two-year investigation. House Republicans grilled Mueller about Fusion GPS and former British intelligence agent Christopher Steele obscure conspiracy theories that often received top billing on Fox News shows. Gertz points out that none of their questioning would have made sense to people watching the hearing who werent well-versed in the alternative news mythology that Fox News late-night lineup has cultivated over the past few years. But, he says, for someone like Hannity, youre seeing your worldview validated [by the congressmens questions] and youre going to bring those people onto your shows, and then the president's going to see it, and it all just keeps feeding itself." 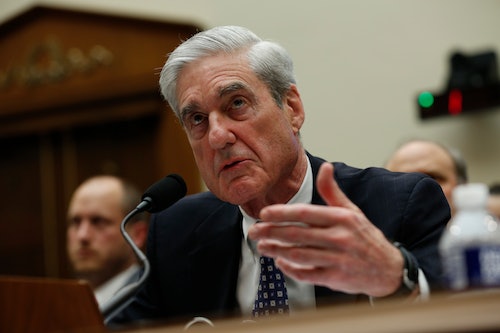 Political grandstanding is a tradition as old as the Founding Fathers. Minority parties often respond to their lack of power by creating a spectacle; in 2017, Democrats, then in the minority, tried to censure Trump over his comments about very fine people on both sides of the riots in Charlottesville, Virginia. Those comments deserved to be condemned of course, but the censure vote was still mostly political theater on the part of the Democrats. Whats different about Republicans is that in Fox News, they have a brazen propaganda organ working directly to amplify their misleading claims. Over time, an alternate reality rises out of the feedback loop between congressional activity and the network, with financial and political benefits to politicians and TV personalities involved.

The effects on viewers is stark a recent poll cited by The Washington Post found that 55 percent of Republicans who watch Fox News as their primary news source say there is almost nothing Trump could do to lose their approval. By contrast, only 29 percent of Republicans who dont cite Fox as their primary source say this. Its impossible to imagine such a sharp diversion over a single issue between otherwise similar liberals who do or dont watch, say, MSNBC. The network's most famous hosts, like Chris Hayes and Rachel Maddow, often become invested in certain storylines see Maddow's dogged following of the Mueller investigation but they are still generally tethered to reality even in their most fervent moments.

The hearings around the 2012 attack on the U.S. diplomatic compound in Benghazi, Libya, laid some of the groundwork for the mess of the present moment. If you look back at the period leading up to the formation of the [House Select Committee on Benghazi, which investigated the attack] what you'll find is a ton of people on Fox calling for the creation of such a committee, and then a quick flurry right before it actually happened, says Gertz. It was very much a similar process through which a select group of Republican congressmen were fueling the Benghazi conspiracy theory and then getting Fox News to talk about it a lot.

At the time, Republicans pushed a series of misleading stories claiming that Hillary Clinton was personally responsible for the deaths of four Americans, even though the committee eventually failed to turn up any evidence of wrongdoing on her part. A Media Matters report found that 1,098 total Fox News evening segments discussed Benghazi in the months leading up to the creation of the committee. That was an average of nearly 13 segments per week, Media Matters found many of them parroting misleading claims.

As for the two Republican congressmen most deeply associated with the Benghazi hearings, they have since left Capitol Hill. One of them is Jason Chaffetz a regular contributor on Fox News. The other is Trey Gowdy, was fired from his contributor gig at the network earlier this month after a failed attempt to join Trump's legal team fighting impeachment.