Trump in the Oval Office on Thursday. | Mark Wilson/Getty Images

Zogby, which Trump has repeatedly touted this week, was once described as “the worst pollster in the world.”

Trump, who this week referred to himself as “the chosen one,” seems constitutionally unable to accept the fact he isn’t as popular as he believes himself to be. And so his go-to move in times like this is to lash out at the media and cherry-pick data that paints himself in the most favorable light.

“This despite the Fake News and Polls!” Trump tweeted on Friday morning, alluding to the Zogby number on Twitter for the second time this week.

This despite the Fake News and Polls! https://t.co/DksmF8hTr7

Zogby, however, is not a reliable pollster. That’s because the firm, which skews to the right and which FiveThirtyEight’s Nate Silver once described as the “worst pollster in the world,” isn’t transparent about its methodology.

This problem is apparent in the polling Trump has repeatedly touted this week. The “Zogby Analytics Poll Methodology” page merely notes that Zogby “conducted an online survey of 897 likely voters in the US,” but doesn’t detail how the sample was chosen. And given how out of step its findings about Trump’s approval rating are with other polls, it appears Zogby’s sample contains more Trump supporters than a firm would find in one that’s truly representative of the electorate.

“Zogby Analytics has a track record of remarkably inaccurate preelection polls,” Stanford University professor Jon Krosnick told the Atlantic when Trump was touting Zogby polls in October 2015, noting that the shabby performance was a result of nonrandom sampling.

Trump’s approval rating is actually much lower than 51 percent

Trump will have a difficult time winning a second term if his approval numbers remain mired at 40 percent or just above. A Fox News poll conducted earlier this month illustrated that dynamic — it found Trump polling below 40 percent in head-to-head matchups with each of four current frontrunners for the 2020 Democratic presidential nomination. 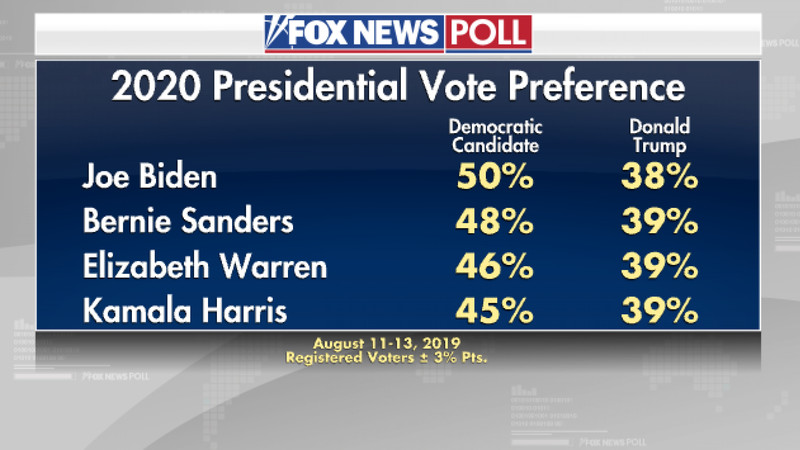 Trump was asked about the Fox News polling during his vacation-ending media availability on Sunday. His response spoke volumes. While Trump’s surprising victory in 2016 might give him some basis for skepticism, he didn’t even seem interested in grappling with the implications of the poll. Instead, he flatly dismissed it, saying “I don’t believe it” because “every place I go we have lines outside.”

REPORTER: A Fox poll has you underwater against the main Democra--

Trump at another point suggested that Fox News — which devotes hours of its programming each day to defending him — is part of a conspiracy to bring him down.

“Fox has changed. And my worst polls have always been from Fox,” he said. “There’s something going on at Fox, I’ll tell you right now. And I’m not happy with it.”

When internal Trump campaign polling that showed the president lagging behind Democratic frontrunner Joe Biden in key battleground states leaked to the media in June, Trump responded in much the way he has this week — by tweeting out a disreputable poll from Rasmussen showing his approval rating at 50 percent.

As Philip Bump detailed for the Washington Post on Friday, Trump has in fact never tweeted a poll that shows his approval rating anything below 5 points above his RealClearPolitics average:

Trump has tweeted about his approval rating more than 40 times as president, either citing numbers he sees or retweeting other people. His number is always higher than the RealClearPolitics average, by anywhere from 5 to 10 points. (On average, his numbers are about 7.6 points higher, if you were wondering.) But even for Trump, who cherry-picks whatever numbers he wants from whichever polls come to his attention, his approval rating hasn’t really moved much.

Over the span of those 42 tweets, Trump’s approval has never been lower than 45 and never higher than 53 percent. In RealClearPolitics’ average, Trump is never been above 46 percent — and never below 37 percent.

Perhaps not coincidentally, Trump disclosed at one of his rallies last year that his theory of polling is that mainstream polls underestimate his approval by about 10 percentage points because people don’t want to publicly admit they support him.

“Some genius analyst said, ‘but he’s got at least 10 percent of the people that don’t want to say they’re voting for him.’ And you know what I say to that — we’ll take ’em anyway,” Trump said. “Whatever it takes.”