“I have no plan right now,” Trump says amid escalating Chinese trade war 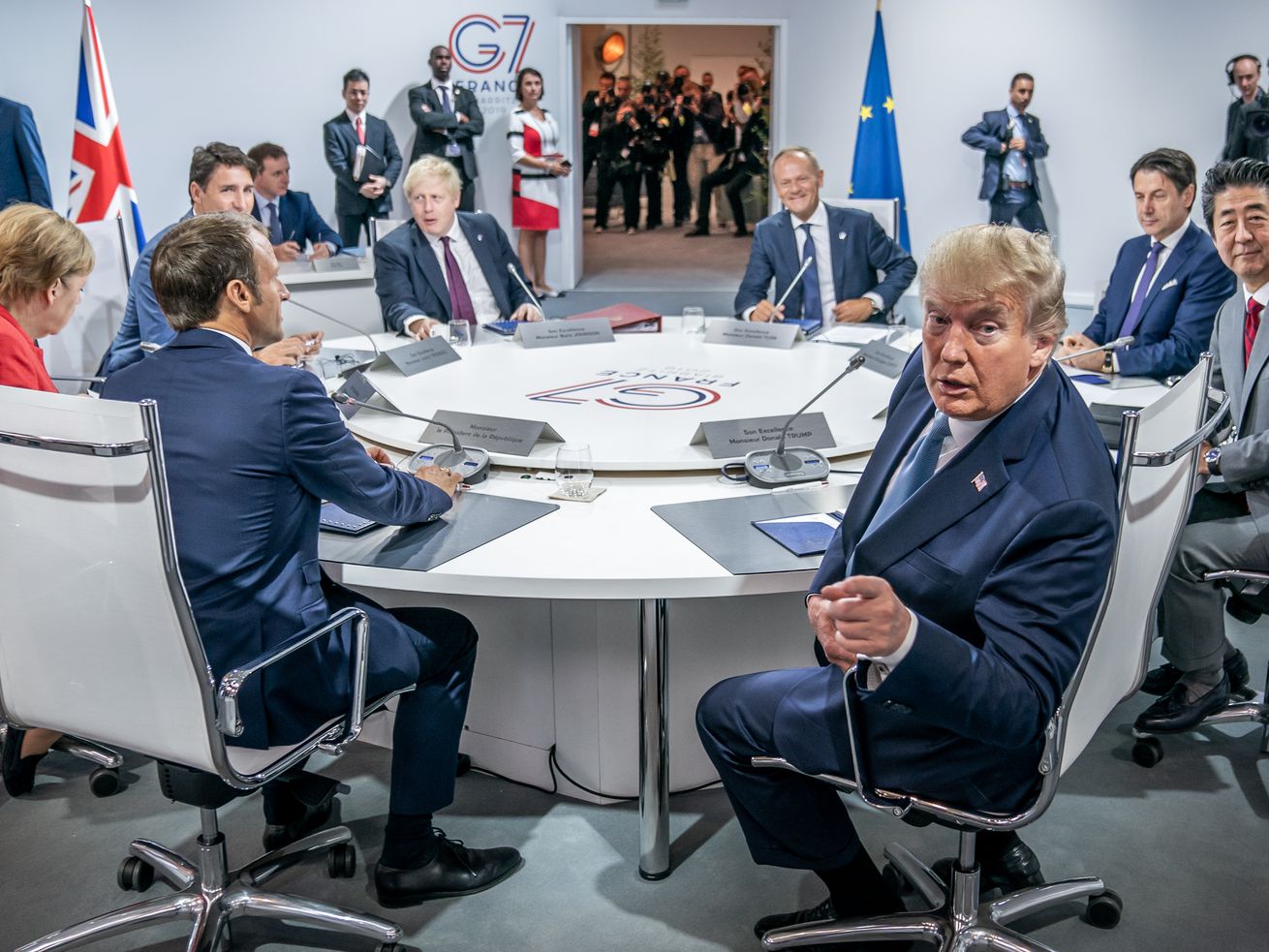 “I have second thoughts about everything,” Trump said after announcing new tariffs on Chinese goods.

Following a whirlwind escalation of the US-China trade war this weekend — in which both countries pledged to increase tariffs on the other — President Donald Trump expressed “second thoughts” about the whole ordeal on Sunday morning.

During a working breakfast with British Prime Minister Boris Johnson at the G7 summit, which is currently taking place in Biarritz, France, Trump was asked whether he was having “any second thoughts on escalating the trade war with China.”

“I have second thoughts about everything,” Trump went on to add.

The remarks came after both the US and China announced retaliatory tariffs against one another on Friday. First China announced that it planned to impose new tariffs of 5 to 10 percent on $75 billion worth of US goods. Then Trump announced, via Twitter, that he would raise existing penalties on two batches of Chinese imports, on a total of $550 billion worth of goods.

“President Trump responded in the affirmative - because he regrets not raising the tariffs higher,” Grisham wrote.

The president has not yet clarified his thoughts on the issue himself. He did, however, expound upon a tweet he sent Saturday that suggested he was working within his presidential powers when he “ordered” — also via Twitter, on Friday — US companies to “immediately start looking for an alternative to China, including bringing your companies HOME and making your products in the USA.”

After being ridiculed for the social media decree, he tweeted that he has the authority to make such an order under the International Emergency Economic Powers Act (IEEPA), which grants wide-ranging economic authority to a president during times of national crisis.

The IEEPA does not permit a president to tell private companies where to operate factories. And there is currently no state of national emergency declared with respect to Chinese trade. But at the breakfast Sunday, Trump said he might, in fact, declare a national emergency with China, which would grant him further power in the trade dispute.

“I have the right to, if I want,” Trump said, accusing China of stealing American intellectual property. “For many years, this has been going on — in many ways, that’s an emergency.”

But the president went on to say that he’s really not sure what he wants to do next with respect to China, before once again misrepresenting how tariffs work, claiming that China is giving the US money through the taxes. (Tariffs are usually passed onto consumers, who pay for them by paying higher prices for goods).

“I have no plan right now. Actually, we’re getting along very well with China right now,” Trump said. “I think they want to make a deal much more than I do. We’re getting a lot of money in tariffs. It’s coming in by the billions. We never got 10 cents from China. So we’ll see what happens. But we are talking to China very seriously.”

Tariffs are a favorite deal-making tool of this president; in May, for example, he threatened to impose levies on Mexican imports during a dispute with that nation over border control. That process kicked off days of fear among businesses and politicians on both sides of the border until Trump said that an immigration deal had been reached and scaled back his threats.

Recently, those threats have even extended to allies. In July, Trump threatened a tariff on French wines in retaliation for a French plan to tax high-earning tech companies, like Google and Facebook, that provide services within France.

“France just put a digital tax on our great American technology companies,” he wrote at the time. “If anybody taxes them, it should be their home Country, the USA. We will announce a substantial reciprocal action on [French president Emmanuel] Macron’s foolishness shortly. I’ve always said American wine is better than French wine!

France just put a digital tax on our great American technology companies. If anybody taxes them, it should be their home Country, the USA. We will announce a substantial reciprocal action on Macron’s foolishness shortly. I’ve always said American wine is better than French wine!

Trump repeated the threat on Friday before departing for the G7 meetings.

“Those are great American companies, and frankly I don’t want France going out and taxing our companies,” Trump said. “And if they do that ... we’ll be taxing their wine like they’ve never seen before.”

Donald Tusk, the president of the European Council, said Saturday that the EU would “respond in kind” to such an action.

“I will protect French wine with genuine determination for many reasons,” Tusk said. “The EU stands by France.”

So far this visit, relations have been cool between the allied US and France. Before arriving, Macron said that trying to draft the traditional joint agreement signed by all the countries of the G7 at the end of the summit would be impossible, given the fact Trump refused to sign the last gathering’s joint statement. He also blamed Trump for blocking consensus on issues like climate change.

“If we draft an agreement about the Paris accord, President Trump won’t agree. It’s pointless,” Macron said Wednesday in Paris.

Trump says the trade war has enriched the US. But that’s not true.

For years, Trump has claimed that tariffs will help to “make our country richer than ever before.” But this is not true. US consumers end up swallowing increased costs, because tariffs cause the price of the taxed goods to go up, as Vox’s Matthew Yglesias has explained:

The way a tariff works is that it’s basically like a sales tax, except instead of being paid on all goods, it’s paid only on imported goods. As with any kind of tax, a tax on Chinese-made goods is obviously bad for Chinese manufacturers. But as with any kind of tax, the financial price is paid in large part by consumers of Chinese-made goods — and, critically, by consumers of domestic goods that compete with Chinese-made ones. Once Trump levies tariffs on Chinese-made appliances, for example, not only does that tend to force Chinese manufacturers to raise prices, but it also tends to encourage American manufacturers to raise prices too since they no longer face as much price competition from China.

Higher prices often lead to decreased sales on consumer goods as well as increased costs for businesses. This has been especially harmful for US agriculture, as tariffs on soybeans and other agricultural products have sparked bankruptcies among American farmers.

The trade war with China has also harmed the American export market. Almost half of goods manufactured within the US are exported, and agricultural commodities and services are also exported abroad. American exports had been increasing steadily for decades before falling off during the Great Recession. But according to the US Chamber of Commerce, the market had largely recovered, reaching a growth rate of about 3 percent over the last ten years.

But the trade war has caused this growth to decline, and turn negative in the first quarter of this fiscal year, according to data from the US Bureau of Economic Analysis. The Institute of International Finance recently reported that the escalating tariffs have cost the US “the equivalent of about $40 billion a year in lost exports.”

Following Trump’s threat of further tariffs on Friday, the Dow dropped more than 600 points. Such economic consequences are beginning to stoke fear among experts of another US recession, a slowdown in China’s economy, and fears of an economic downturn in Europe, too.

In general, the Trump administration has denied that anyone outside of China will suffer any ill effects from the trade war. In fact, Trump has often claimed that China is paying the US money due to the tariffs. On Friday, he claimed the US has reaped “tens of billions of dollars” from China due thanks to the tariffs.

Trump is still lying about tariffs.

"People don't understand that yet," he says about his false claim that China is paying for them. (Tariffs are actually taxes on American importers generally passed on to consumers.) pic.twitter.com/5gk1q257WH

He repeated this claim at the G7, saying money is “coming in by the billions.” This is not true. It is, as the Institute of International Finance reported, going out by the billions.

Trump officials has occasionally admitted the trade war is not the boon the administration typically claims. Last spring, White House economic adviser Larry Kudlow said the US would suffer some of the economic consequences of a trade war.

“Both sides will pay in these things,” Kudlow said.

And Trump recently said he would hold off on raising some tariffs on Chinese goods in order to help keep prices low for Christmas shoppers. (Although it is no longer clear if he still intends to do so, following Friday’s announcement of tariff increases.)

Overall, Trump has not signaled any intentions to calm his rhetoric on trade. He has, however, said that he would like to discuss the matter further with close US allies. The G7 leaders will sit down for a special session on trade later today — a meeting organized specifically by Trump.

“I have no plan right now,” Trump says amid escalating Chinese trade war